What can I do, as a patient, to minimize the risk of experiencing eye changes from diabetes (Diabetes Eyes)?

What does diabetes do to the eye?

Diabetes may cause changes in the back of the eye, called the retina.

There are “two flavors” of diabetes in the retina:

What can you do to treat “Diabetes Eyes” conditions?

The painless office Argon Laser is the mainstay of our therapy to treat leaking/bleeding vessels. Before your laser treatment, you may also have a diagnostic Fluorescein Angiography performed in the office. This involves a small injection of a dye in a vein. Special photographs are then taken to help identify “problem areas in the retina” for treatment. 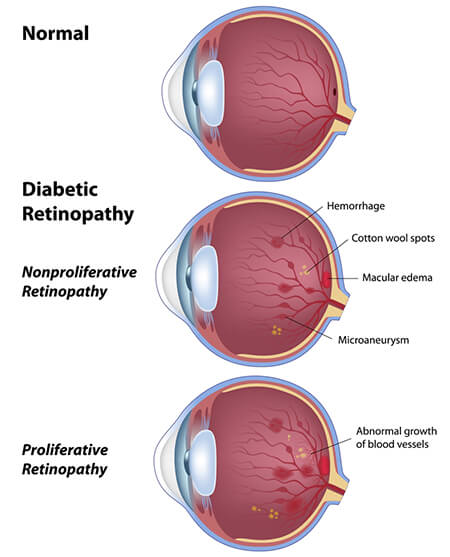 Diabetic Retinopathy is a complication of diabetes and a leading cause of blindness. It occurs when diabetes (uncontrolled blood sugar) damages the tiny blood vessels inside the retina, which is the light-sensitive tissue at the back of the eye and will generally affect both eyes.

If you have diabetic retinopathy, you may not initially notice changes in your vision. The earliest phase of the disease is known as background diabetic retinopathy or non-proliferate diabetic retinopathy (NPDR). In this phase, the arteries in the retina become weakened and leak, forming small, dot-like hemorrhages. These leaking vessels often lead to swelling or edema in the retina and decreased vision.
People with non-proliferative diabetic retinopathy may experience no difficulties with vision. However, those who do experience problems, may develop macular edema or macular ischemia.
Macular edema occurs when the macula, the small area in the center of the retina that provides central detail vision, can swell from the leakage of blood and fluid from blood vessels in the retina. Central vision loss may be mild to severe, and side (peripheral) vision loss can also occur. Reduced sensitivity to color is also a result.

Macular ischemia (oxygen-deprived) will occur when small blood vessels feeding the macula block. Because the macula doesn’t receive sufficient blood, the cells in the macula no longer work correctly, which causes vision to blur.

The next stage is known as proliferate diabetic retinopathy (PDR). In this stage, circulation problems cause areas of the retina to become oxygen-deprived or ischemic. New, weaker, vessels develop as the circulatory system attempts to maintain enough oxygen levels within the retina. This is called neovascularization. Unfortunately, these delicate vessels hemorrhage easily. Blood may leak into the retina and vitreous, causing spots or floaters, along with decreased vision.
In the later phases of the disease, continued abnormal vessel growth and scar tissue may cause serious problems such as retinal detachment and/or glaucoma.

Diabetics should see their eye doctor at least once a year for a dilated eye exam. Your eye doctor may diagnose retinopathy using a special test called fluorescein angiography. In this test, dye is injected into the body and then gradually appears within the retina due to blood flow. Your retina will then be photographed with the illuminated dye. Evaluating these pictures tells your doctor how far the disease has progressed.

According to the American Academy of Ophthalmology, 95% of those with significant diabetic retinopathy can avoid substantial vision loss if they are treated in time. The possibility of early detection is why it is so important for diabetics to have a dilated eye exam at least once a year.
Diabetic retinopathy can be treated with laser photocoagulation to seal off leaking blood vessels and destroy new growth. Laser photocoagulation doesn’t hurt because the retina does not have nerve endings.
In some patients, blood leaks into the vitreous humor and clouds the vision. Your eye doctor may choose to simply wait to see if the clouding will break up on its own. A procedure called a vitrectomy removes blood that has leaked into the vitreous humor. The eye gradually replaces lost vitreous humor, and the vision usually improves.

If diabetic retinopathy has caused your eye to form a cataract, it can be corrected surgically. Patients who have developed glaucoma can usually be treated with topical medicated eye drops.

Secondary glaucoma is also known as neovascular glaucoma. With this complication, delicate new blood vessels in the eye may form a new group directly on the iris, blocking the outflow of fluid from the eye. This condition results in increased pressure of the fluid in the eye, and can cause optic nerve atrophy and loss of the full visual field. Treatment involves the application of a laser to the leaking areas. Standard glaucoma treatment with drops or diuretics may also be recommended to lower intraocular pressure. For more information on glaucoma click here (LINK).

The abnormal blood vessels that grow in proliferative diabetic retinopathy are often accompanied by hemorrhage and scar tissue formation. This scarring can cause wrinkling of the retina and even separation from the wall of the globe. This is known as a retinal detachment. Wrinkling of the retina can result in visual distortion whereas retinal detachment can cause severe vision loss depending on where the separation has occurred.